The institute was founded in 2001 by Jaypee Group and commenced its operation at the start of the academic year in July 2001. Initially, it was affiliated with the state university Jaypee University of Information Technology, Waknaghat and started offering only diploma courses. By 1 November 2004, it was declared as a Deemed University by UGC. Jaypee Institute of Information Technology is located in Uttar Pradesh’s-62Sec-62Sec-128Sec-128 Campuses within Uttar Pradesh: Noida Sec-62, Noida Sec-128 JIIT, Noida is located in the corporate and housing hub at Sector-128, Noida. It commenced operations from the start of the academic session in August 2009. The sector-128 campus is an extension of the main campus. Jaypee Institute of Information Technology, Greater- Noida

Institute offers undergraduate programs leading to a Bachelor of Technology degree and a postgraduate program leading to a Master of Technology degree. A five-year dual degree program and doctorate research programs are also offered. The institute also offers BBA & MBA programs under its constituent Jaypee Business School(JBS) which offers specialization in various major and minor subjects like digital marketing, business analytics etc. All undergraduate and postgraduate programs of the institute have been accredited by the National Board of Accreditation of AICTE. Jaypee Institute of Information Technology Greater- Noida

In 2010, the Government of India decided to derecognise 44 universities including JIIT. However, this matter is still pending. In its recent judgement the Supreme Court of India directed the University Grants Commission to conduct a fresh physical verification of infrastructure and faculty strength of deemed universities, which were black-listed by the Tandon Committee. However, in early 2017, JIIT regained its deemed university status and is now NAAC accredited. JIIT received approval by AICTE in 2018.

The university was ranked in the 101-150 band among universities in India by the National Institutional Ranking Framework (NIRF) in 2020,[18] in the 151–200 band overall and 96 in the engineering ranking.

You may also like Best Engineering College In Greater- Noida 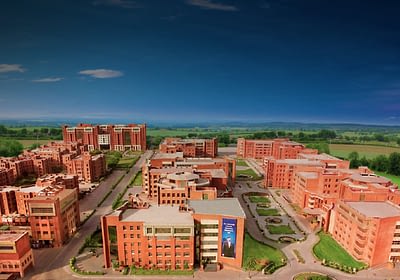