Babasaheb Bhimrao Ambedkar Bihar University popularly also known as B. R. Ambedkar Bihar University, is a state university located in the north prime of Bihar state in the city of Muzaffarpur in India. Established in 1960, this university has 37 constituent colleges. Distance education courses are also offered. Besides, the university organizes symposium, seminars and workshops. It is a premier institution of teaching and learning in the city and offers full-time and part-time courses ranging from undergraduate to postgraduate and research level. BR AMBEDKAR BIHAR UNIVERSITY

The Courses offered by the University are approved from University Grants Commission (UGC). The university is a premier institution of teaching and learning in the city and offers various full-time and part-time courses ranging from undergraduate to postgraduate and research level. The university also acts as an affiliated link between several colleges and institutes located across the state in providing higher education. The University is a member of The Association of Indian Universities (AIU).

The University Grants Commission has been assisting colleges for procuring personal computers since 1987 under the scheme of providing computers to Colleges. In the X Plan UGC proposes to establish UGC Network Resource Centres (UGC-NRC) in Colleges, where assistance would be provided for the purchase of Computers and also for Internet Connectivity. All Colleges under UGC purview i.e. under section 2(f) and 12B of the UGC Act which are not having computer facility so far under this scheme. 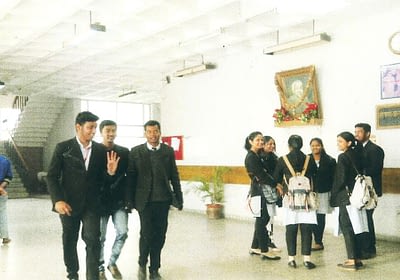