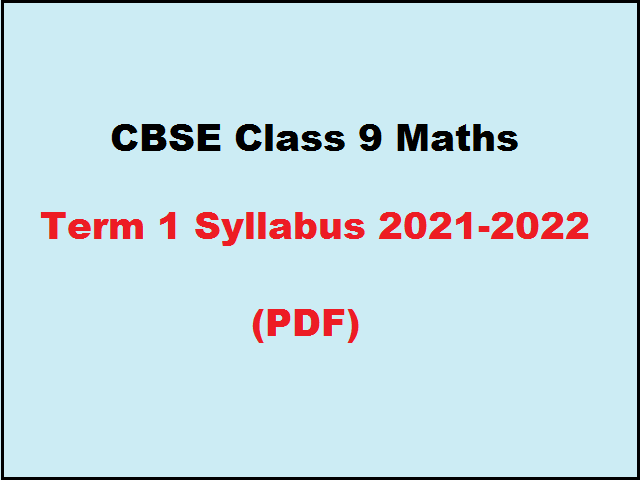 CBSE Term 1 Syllabus for Class 9 Maths for the current academic session 2021-2022 can be downloaded from here in PDF format. Check this revised syllabus to know the course structure, examination pattern and criteria of internal assessment for Class 10 Maths Term 1.

CBSE Class 9 Term 1 Syllabus of Maths for the 2021-2022 Session is available here. According to the new assessment scheme introduced by the Central Board of Secondary Education (CBSE) for Class 9th to 12th, 50-50 per cent syllabus will be covered in each term of the academic session. Class 9 Maths Term 1 will have a MCQs based exam towards its end. Students must go through the complete syllabus provided below and carefully check the chapters and topics to be covered in the first term and start effective preparations for their term end exam.

1. Examples of non-recurring/non-terminating decimals. Existence of non-rational numbers (irrational numbers) such as √2,√3 and their representation on the number

2. Rationalization (with precise meaning) of real numbers of the type 1/(𝑎+𝑏√𝑥) and 1/(√𝑥+√𝑦) (and their combinations) where x and y are natural number and a and b are integers.

3. Recall of laws of exponents with integral powers. Rational exponents with positive real bases (to be done by particular cases, allowing learner to arrive at the general laws.)

Explain that a linear equation in two variables has infinitely many solutions and justify their being written as ordered pairs of real numbers, plotting them and showing that they lie on a line.

Examples, problems from real life with algebraic and graphical solutions being done simultaneously

The Cartesian plane, coordinates of a point, names and terms associated with the coordinate plane, notations, plotting points in the plane.

1. (Motivate) If a ray stands on a line, then the sum of the two adjacent angles so formed is 180˚ and the converse.

2. (Prove) If two lines intersect, vertically opposite angles are equal.

6. (Motivate) If a side of a triangle is produced, the exterior angle so formed is equal to the sum of the two interior opposite angles.

5. (Prove) The angles opposite to equal sides of a triangle are equal.

6. (Motivate) The sides opposite to equal angles of a triangle are equal.

7. (Motivate) The sides opposite to equal angles of a triangle are equal.

Area of a triangle using Heron’s formula (without proof)

You may also check the old syllabus of CBSE Class 9 Maths from the link provided below. You can understand how chapters and topics have been adjusted for rationalising the syllabus for the 2021-2022 session.