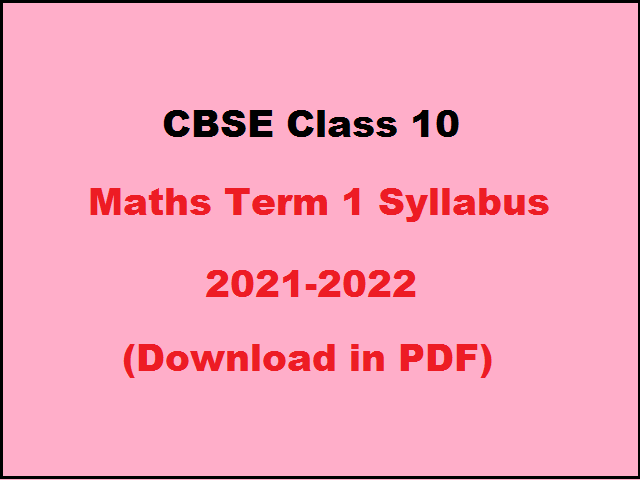 CBSE Class 10 Maths Revised Syllabus for First Term of Academic Session 2021-2022 is available here for download in PDF. CBSE Class 10 Maths Term 1 and Term 2 Exams will be conducted according to this new rationalised syllabus only.

The Central Board of Secondary Education (CBSE) has released the revised syllabus for Class 10th. This new rationalised syllabus will be used for the term-wise assessment of students in the current academic session. With this article, you may download the revised CBSE Syllabus for Class 10 Maths for Term 1 of the 2021-2022 session. Start your preparations for the Term 1 Exam according to the course content and guidelines mentioned in this revised CBSE Syllabus only.

Fundamental Theorem of Arithmetic – statements after reviewing work done earlier and after illustrating and motivating through examples. Decimal representation of rational numbers in terms of terminating/non-terminating recurring decimals.

Zeroes of a polynomial. Relationship between zeroes and coefficients of quadratic polynomials only.

2. (Motivate) If a line divides two sides of a triangle in the same ratio, the line is parallel to the third side.

6. (Motivate) If a perpendicular is drawn from the vertex of the right angle of a right triangle to the hypotenuse, the triangles on each side of the perpendicular are similar to the whole triangle and to each other.

8. (Prove) In a right triangle, the square on the hypotenuse is equal to the sum of the squares on the other two sides.

9. (Motivate) In a triangle, if the square on one side is equal to sum of the squares on the other two sides, the angle opposite to the first side is a right angle.

Proof and applications of the identity sin2A + cos2A = 1. Only simple identities to be given

Motivate the area of a circle; area of sectors and segments of a circle. Problems based on areas and perimeter / circumference of the above said plane figures. (In calculating area of segment of a circle, problems should be restricted to central angle of 60° and 90° only. Plane figures involving triangles, simple quadrilaterals and circle should be taken.)

Classical definition of probability. Simple problems on finding the probability of an event.

You may also download the full syllabus in PDF from the link mentioned below: