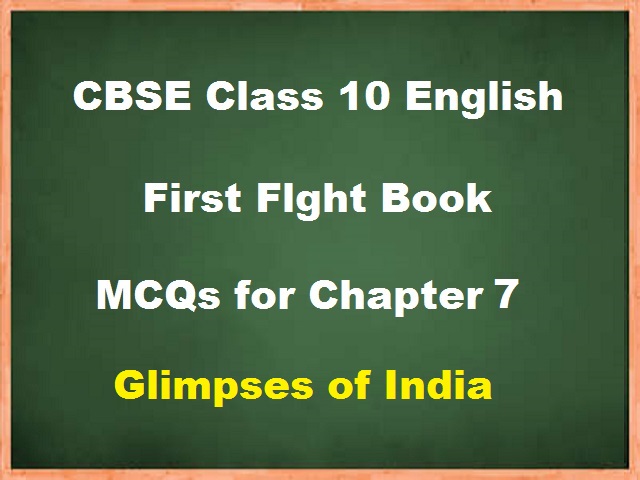 MCQs for CBSE Class 10 English Chapter 7 – Glimpses of India (with answers) are available here. These MCQs are published by the CBSE Board. These questions are very important for the CBSE Class 10 Board Exam 2021-2022.

CBSE Class 10 English MCQs for Chapter 7 – Glimpses of India are provided here with answers. These are extract based questions for Chapter 7 of the Class 10 English First Flight Book. These MCQs are published by the CBSE Board. Students should practice all these questions to get an idea about in what ways MCQ questions can be asked in the Board Exam 2021-2022 and what will be the difficulty level of these objective type questions.

Multiple Choice Questions based on an extract.

(A) “Our elders are often heard reminiscing nostalgically about those good old Portuguese days, the Portuguese and their famous loaves of bread. Those eaters might have vanished but the makers are still there. We still have amongst us the mixers, the moulders and those who bake the loaves. Those age-old, time-tested furnaces still exist. The fire in these furnaces has not yet been extinguished. The thud and jingle of traditional baker’s bamboo, heralding his arrival in the morning, can still be heard in some places. ”

i. The narrator says that the furnaces were ‘time-tested’ because

a) they had been thoroughly tested each time, before being used.

b) they had proved the test of time and were working well.

c) they had been tested by modern day experts.

d) they had the power to withstand inexperienced usage.

Answer: b) they had proved the test of time and were working well.

ii. Those eaters might have vanished but the makers are still there. Pick the option that expresses the tone of the narrator.

iii. Pick the idiom that brings out the same meaning of ‘reminiscing’ as used in the passage

a) train of thought.

b) commit something to memory.

c) a trip down memory lane.

iv. Why do you think the baker came in with ‘a thud and a jingle’?

a) He wanted to make everyone alert and active with his presence.

b) He wanted to wake up everyone from their slumber and ask them to visit the bakery.

c) He was used to making a loud noise as most people responded to just that.

d) He wanted to make people aware that he had come around to sell his goodies.

Answer: d) He wanted to make people aware that he had come around to sell his goodies.

v. The ‘fire in the furnaces has not yet been extinguished’ implies that

e) the furnaces are still being used to bake the loaves of bread.

f) The fire is in the process of being reviewed as a replaceable method for heating furnaces.

g) The furnaces are very strong and cannot be shifted for use in other areas.

h) The fire in the furnaces takes a long time to cease burning, once lighted.

Answer: e) the furnaces are still being used to bake the loaves of bread.

(B) “Tell me another!” scoffed Pranjol. “We have an Indian legend too. Bodhidharma, an ancient Buddhist ascetic, cut off his eyelids because he felt sleepy during meditations. Ten tea plants grew out of the eyelids. The leaves of these plants when put in hot water and drunk, banished sleep.” “Tea was first drunk in China,’’ Rajvir added, ‘‘as far back as 2700 B.C.! In fact, words such as tea, chai and chini are from the Chinese. Tea came to Europe only in the sixteenth century and was drunk more as medicine than as beverage.”

i. The main idea of this extract is

a) Tea as a popular beverage in Europe and how it spread.

b) Origin of tea in India and why it became popular in Europe.

c) Importance of India in popularising tea and influencing Europe.

d) Indian legend on tea and how it travelled from China to Europe.

Answer: d) Indian legend on tea and how it travelled from China to Europe.

ii. Why do you think Pranjol ‘scoffed’?

a) He was upset with the legend Rajvir shared.

b) He was mocking Rajvir for his lack of knowledge.

c) He was amused and tickled at what Rajvir shared.

d) He was impressed with what Rajvir had shared.

Answer: c) He was amused and tickled at what Rajvir shared.

iii. Pick the option that includes the tea label information that corresponds to the given sentence. “The leaves of these plants when put in hot water and drunk, banished sleep.”

a) Dr. Smith encouraged drinking of green tea whenever available, to reduce chances of tooth loss.

b) Dr. Smith prescribed regular tea drinking to all his patients with a weak heart.

c) Dr. Smith always served tea as refreshment when he has guests, as they all enjoyed this beverage.

Answer: c) Dr. Smith always served tea as refreshment when he has guests, as they all enjoyed this beverage.

v. Based on this extract, how do you think Rajvir felt while narrating?

a) i) excited ii) agitated

b) i) hysterical ii) nervous