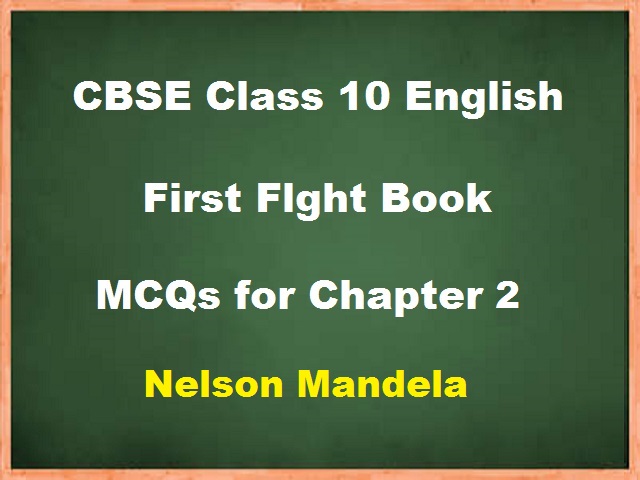 MCQ questions and answers for CBSE Class 10 English Chapter 2 Nelson Mandela are available here. These questions are important for the CBSE Term 1 Board Exam 2021-2022 preparations.

Get the Multiple Choice Questions published by CBSE for Class 10 English Chapter 2 – Nelson Mandela. All these MCQs are available here with answers. Class 10 students must practice all the questions thoroughly so that they can score well in the objective type paper in the CBSE Class 10 Term 1 Board Exam 2021-2022. All the questions are based on the extract taken from the chapter – Nelson Mandela.

Multiple Choice Questions based on an extract

(A) “We, who were outlaws not so long ago, have today been given the rare privilege to be host to the nations if the world on our own soil. We thank all of our distinguished international guests for having come to take possession with the people of our country of what is, after all, a common victory for justice, for peace, for human dignity.”

I .1. The guests at the spectacular ceremony are being called distinguished because they

a) they have been invited as guests to attend it.

b) they are eminent world leaders witnessing it.

c) they are visiting the country for this purpose.

d) they have resumed diplomatic relations with the country.

Answer: b) they are eminent world leaders witnessing it.

iii. Why does the speaker say that it is a ‘rare privilege’?

He says this as they have

a) been deprived of this honour.

b) seldom been given this honour.

c) experienced it for the first time.

d) been chosen over other countries, for this honour.

Answer: c) experienced it for the first time.

iv. How do you think the speaker feels? Choose the option that best fits his state of mind.

v. Pick the option that showcases the usage of ‘host’ as in the extract.

a) He was praised for his hospitality as the host of the party.

b) She was able to host the event without any hindrance.

c) She met the host and apologised for her friend’s misbehaviour.

d) He is the best host that one can ever come across.

Answer: b) She was able to host the event without any hindrance.

(B) “It was only when I began to learn that my boyhood freedom was an illusion, when I discovered as a young man that my freedom had already been taken from me, that I began to hunger for it. At first as a student I wanted freedom only for myself, the transitory freedoms of being able to stay out at night, read what I pleased and go where I chose. Later, as a young man in Johannesburg, I yearned for the basic and honourable freedoms…”

I. The title that best suits this extract is

a) Freedom for everything

b) Knowledge about Freedom

ii. Why do you think the speaker mentions some freedoms as ‘transitory’?

a) The freedoms are momentary and keep changing with time.

b) The definition of freedom is constant but perspectives differ.

d) Freedom is not that important after a certain age.

Answer: a) The freedoms are momentary and keep changing with time.

iii. Choose the option that best fits the usage of the word ‘illusion’ as used in the extract.

a) He was never able to get past the illusion.

b) The illusion I experienced was quite intriguing.

c) A large mirror in the room creates an illusion.

d) I was living under the illusion that this is possible.

Answer: d) I was living under the illusion that this is possible.

iv. The speaker says, ‘at first as a student I wanted freedom only for myself.’ Why do you think he only thought about himself?

a) He didn’t want to think about the freedom denied to others.

b) He was being selfish and was only bothered about himself.

c) He didn’t think that freedom denied to him was important for others.

d) He was too young to realise that freedom was denied to others as well.

Answer: d) He was too young to realise that freedom was denied to others as well.